Jordan Jimenez '16 Through the Lens of a Champion

It was hard for Jordan Jimenez, a 2016 Riordan graduate and viral NBA photographer known as “Jsquared,” to pinpoint the “I made it” moment in his journey – but celebrating with the 2022 Golden State Warriors at their championship parade in San Francisco this summer was definitely worth mentioning.

“It was a really dope experience,” Jimenez said. “It was awesome to just see how many people in the crowd were actually recognizing me. Some people are wearing the Jsquared shirts. Some people were yelling, “Jsquared!” People were asking for pictures with me.”

Jimenez “worked” the parade as a photographer, but his responsibilities that day also included greeting fans, riding on a parade bus, and shooting champagne-filled water guns at the celebrating crowd. 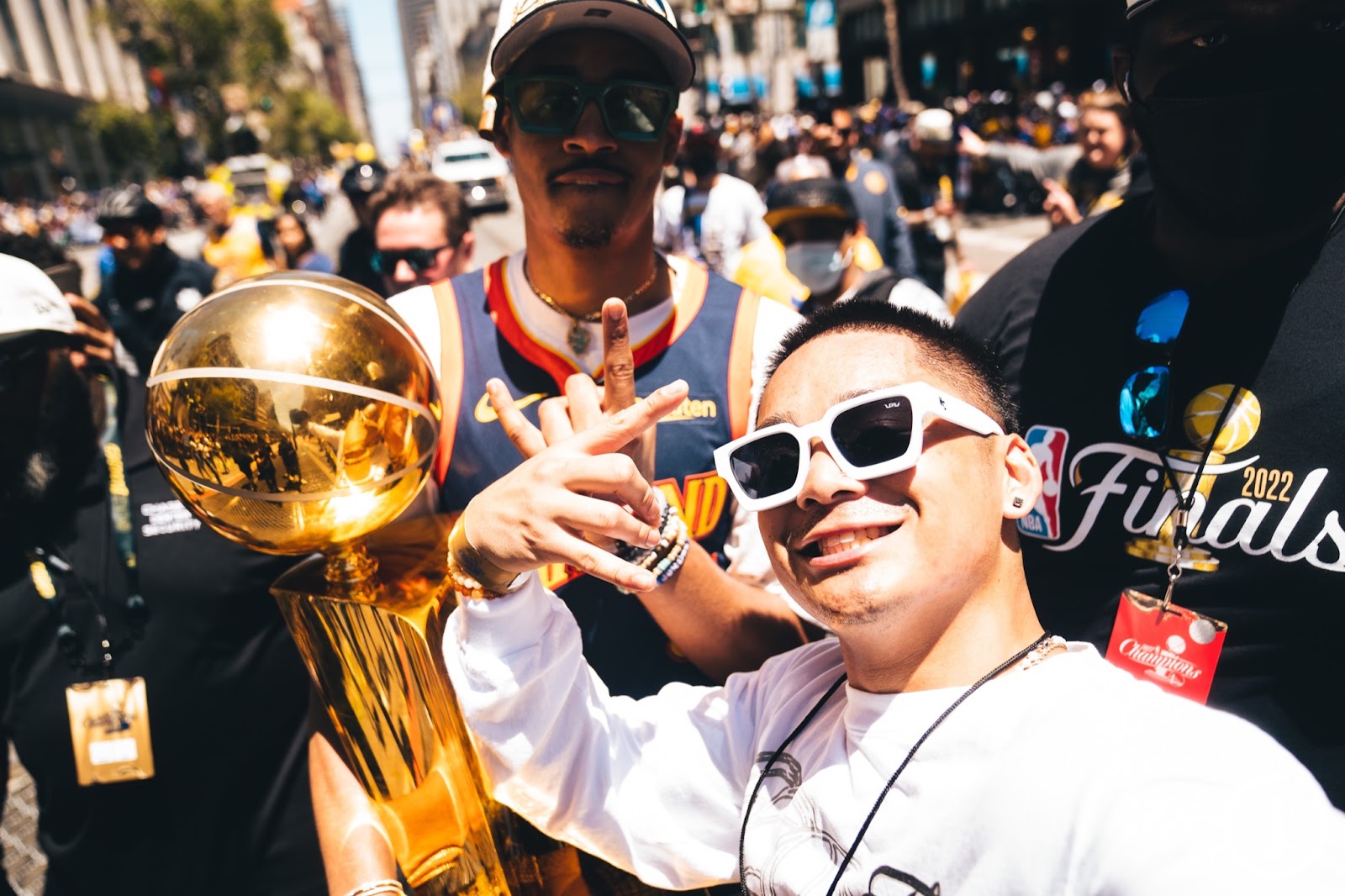 Pictured: Business partners and friends Jordan Jimenez and Jordan Poole share a moment together at the Warriors’ 2022 Championship Parade. (Courtesy of Jordan Jimenez)

“It's really cool to know that the Bay Area is behind me as much as they're behind the Warriors,” he said about the fans who cheered for him as well as his partner and friend Warriors guard Jordan Poole.

Jimenez’s social media pages are filled with photographs of NBA legends like Stephen Curry, LeBron James, Kevin Durant and countless others. Jimenez travels with the Warriors often as a photographer, most recently flying with the team on a preseason trip to Japan. 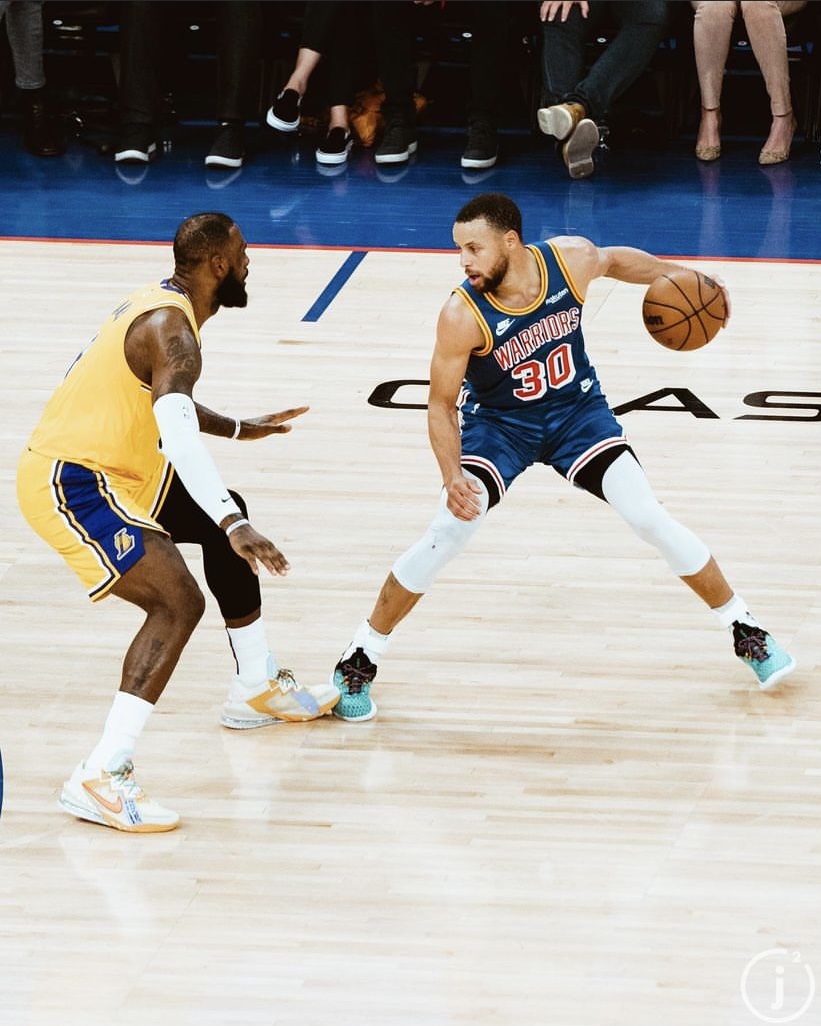 Jimenez connected with Poole early in his career and quickly formed a friendship with the Warriors rookie. Today, Poole’s Instagram page contains a gallery of photos of Poole shooting deep 3-pointers or contorting his body in traffic to finish layups – all of which were shot by Jimenez.

That friendship opened the door for Jimenez to shoot Warrior games, but it was Jimenez’s skill as a photographer that shot him into social media stardom – shooting what Bleacher Report described as the “coldest photos in NBA history.” 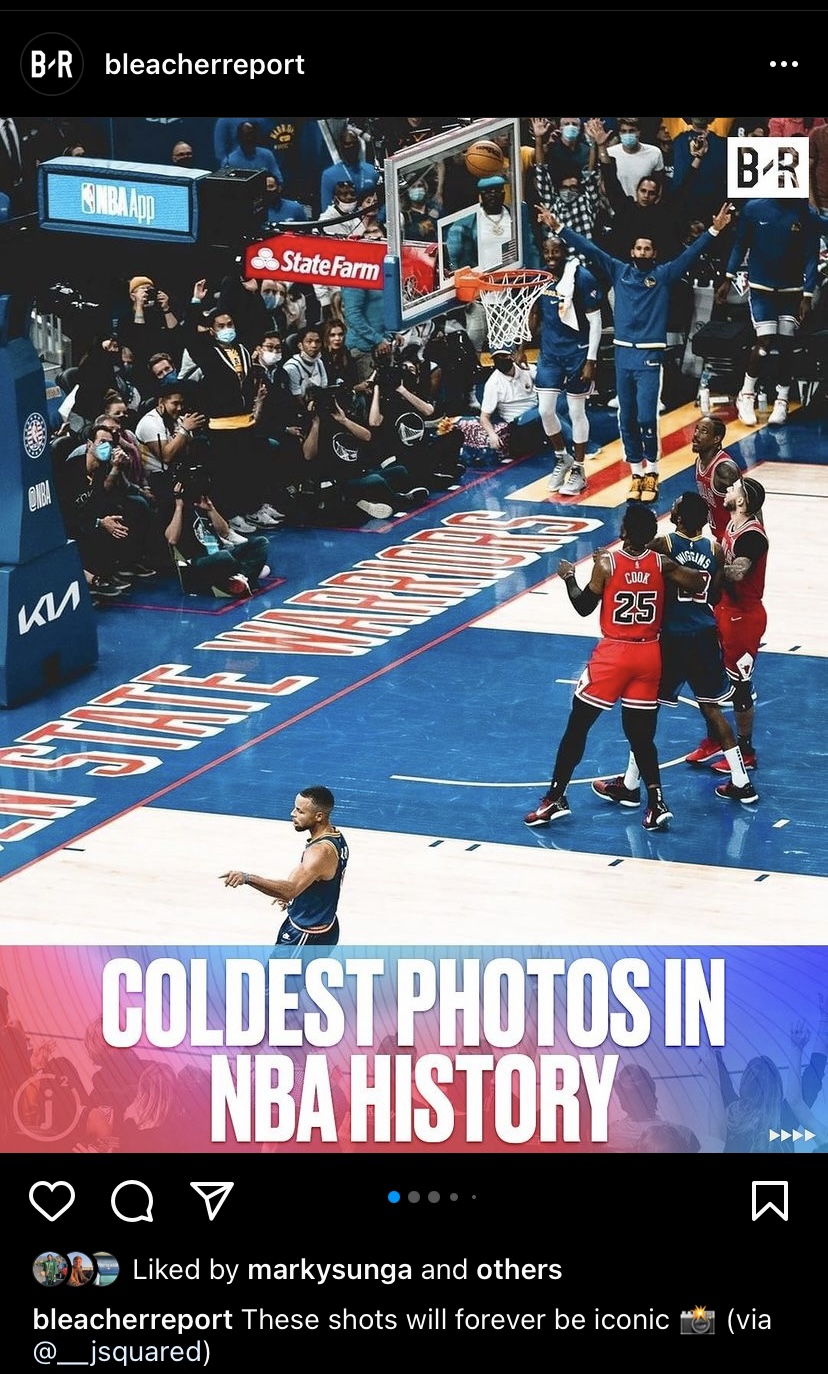 Pictured: Jordan Jimenez’s photo of Warriors star Stephen Curry looking away as the ball is in midair, a signature celebration, was deemed one of the “coldest photos in NBA history” by Bleacher Report. (From @Bleacherreport)

Before Jimenez was traveling with the Warriors to capture photos for the NBA Finals, he was a senior at Riordan mostly shooting prom and portrait photos for fellow Crusaders.

“I picked up a new hobby, which was obviously photography, and for me, it was my way of deciding that I wanted to be better."

Jimenez said that he had struggled with depression throughout his life, and photography was “a tool for seeing the world in a different way” for him.

While balancing band rehearsals, LIFE team meetings and multiple AP classes – Jimenez picked up a passion that would eventually lead him to internet stardom and features on ESPN, Bleacher Report and NBC Sports Bay Area.

“Everybody kind of has their own little ‘Jsquared before Jsquared’ story, when I was just simply just Jordan Jimenez before I had like this alternate identity,” he said.

In fact, classmates – including myself – would wear T-shirts and use stickers with his logo on it to support their fellow Crusader following his passion. 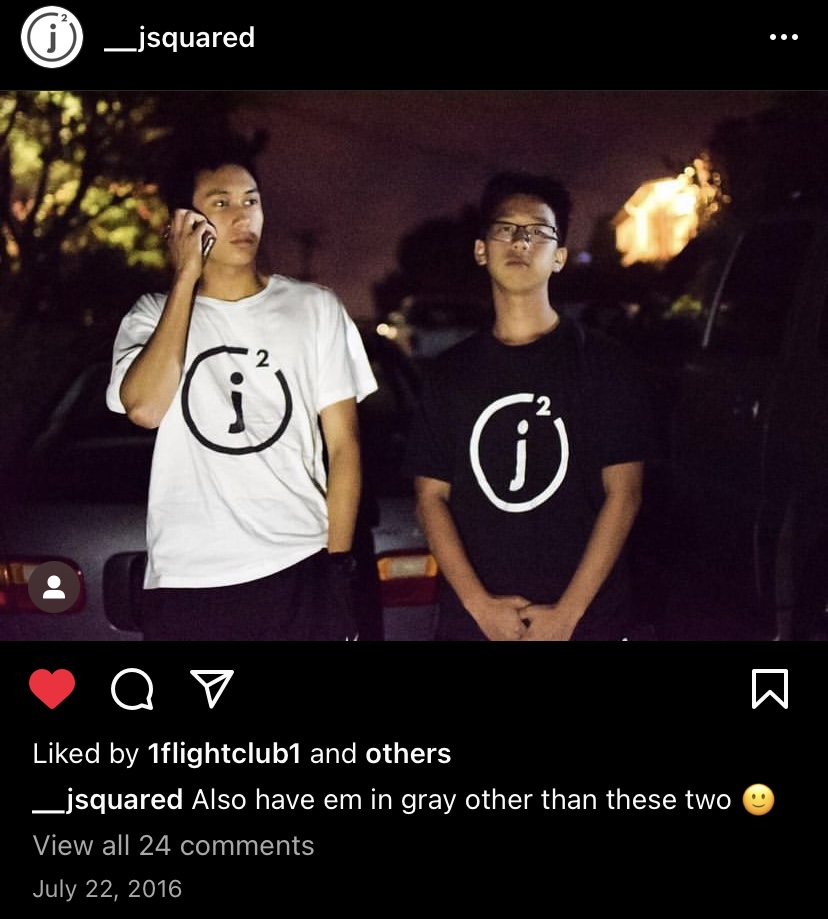 “People from the community, just reaching out and telling me to keep going and how proud they are of me… that's been absolutely incredible.”

Even after leaving Riordan, Jimenez said the values that he learned as a Crusader were lessons that he carries with him to this day.

“I think one of the things that has made a really big impact on my life was the band program,” he said.

Jimenez was a section leader among the Trombone section as well as the French Horn section during his time at Riordan. Parades and concerts would take up most band students’ Saturday’s and homework demanded that students practice the music at home for half an hour after school every day.

The tradeoff was the Riordan band distinguishing itself from any other band program in the WCAL and winning awards at events and competitions every year.

Jimenez said that those values of discipline and hard work instilled in him in band – as well as the resulting success – taught him that greatness wasn’t always easy, but it was always worth it.

“People would hate to be in band class sometimes because of how strict (Mr. Scott Souza, the former band director at Riordan) was, but the impact that he's had on my life, and I'm sure plenty of other people in the band – with the discipline, the time management, the manners, the demeanor, everything that he instilled in us – has definitely continued to play a role in my life,” he said. 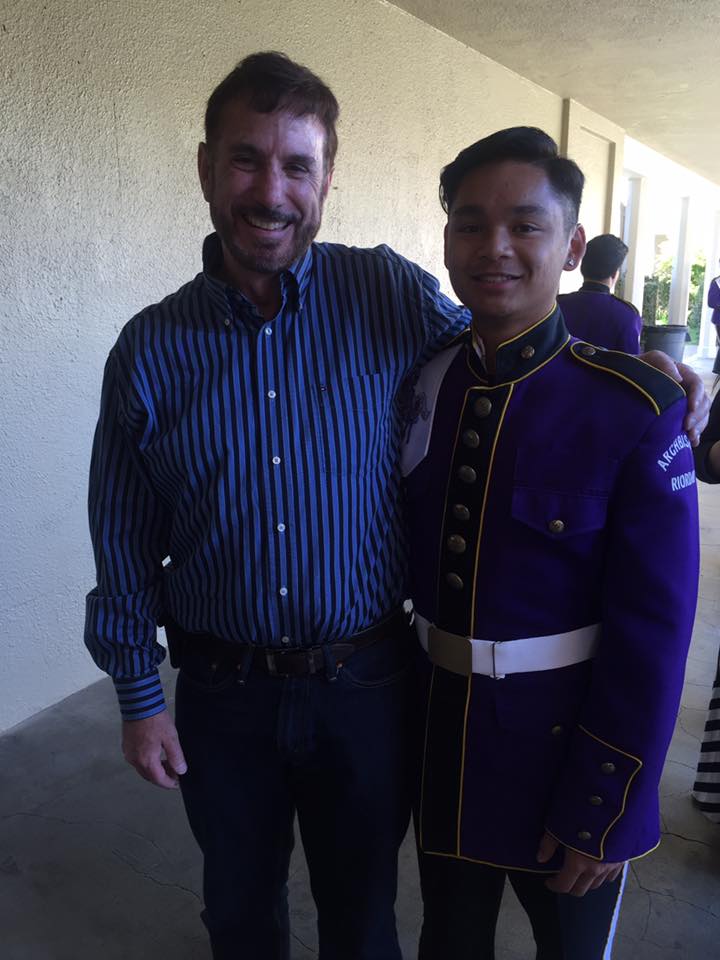 One of the key lessons that Mr. Souza would instill in all his students was to “leave a place better than you found it” no matter where are. That means if there was trash in the bleachers before you got there, even if it’s not yours, you have to pick it up or face the consequences.

Jimenez said he took that lesson and applied it to his everyday life, no matter where he goes.

“You can also apply that to the energy of a room and make sure that you're bringing the right energy and making sure that that room is brighter because you stepped in it,” he said.

Jimenez said he applies that lesson into his photography as well to inspire people to be brave enough and work hard enough to chase their dreams like he did.

“If I'm able to impact people on a wide scale – or even just one person – I'll know that I've done my job in just leaving the earth better than I found it."

The heavy – sometimes seemingly unforgiving – workload at Riordan also prepared Jimenez to outwork others in photography.

“Once I stepped into the real world, managing my time was way easier,” he said.

That work ethic was the basis of Jimenez’s belief in himself that he could reach the heights that he has as a photographer.

While outsiders just see the success of Jimenez’s photos — like the ones featured on Bleacher Report’s Instagram get millions of views, they don’t see the hours of quiet work put into the craft day in and day out.

And that’s just how Jsquared likes it.

“Riordan fully prepared me to go out into the next level of education and just have the understanding of what it takes to be a good student."